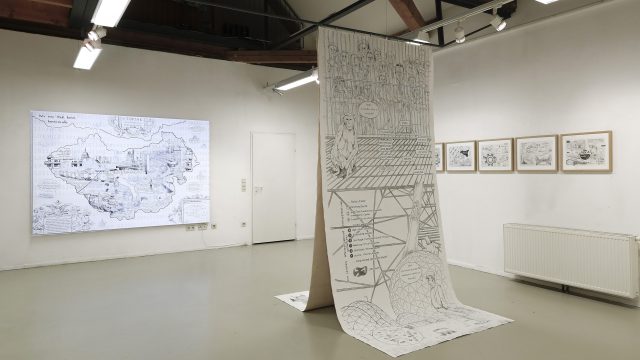 For the project Paths to EU-topia meter-height (350 cm x 147 cm), roll-out canvases with meticulous drawings have been developed. The starting point of the critically examination research was the recently published `White Paper` by the European Union on the future of the community of states. The narrative drawings, developed out of this research, consist of innumerable tendencies of our present and thus utopian processes which should not be read as instructions, but can be understood as a basis for discussion. Eventually we have to ask ourselves again what are the current questions, which we have to point on our interests? What are the paths to EU-topia? The canvases were presented as a starting point in two complete different locations. On the one hand – at the Styria House in Brussels/Belgium as a place highly political dedicated and on the other hand at the Pavelhouse, a very open and discursive, human orientated Museum very close to the border between Austria and Slovenia.

sketches of the canvases

A central question in times of geopolitical changes, is directed to our security. However, we must not forget the question: What about our freedom? Where will Europe be heading in the coming years? The picture does not show clearly: is the fence just removed or built up? Viewers must find the answer for themselves …

In difference to Brussels the Exhibition concerns beneath the EU-topia Canvases, The Seismograpy of the Indefinite as well as some diary drawings.

So what happens if one understands the city not as a defending system, but once again as a present base, based on incredibly many dynamic processes and opportunities? How can we learn from existing ideas and draw our contemporary conclusions from them? studio ASYNCHROME believes in the (e)utopian potential in our society – their view of that utopia is not a failed plan or wishful thinking, but a tool, a way to think about our world and thus change! The drawn narrations, however, do not constitute guidance, but can be understood as the basis for discussion – because the processes are differentiated, so interwoven with each other at the same moment. With these shortcuts, studio ASYNCHROME wants to make its utopian track search visible. Open one or more doors to talk about various possibilities and perspectives together and thus to experience different views and paths to EU-topia. The question of EU-topia was accompanied in this exhibition by the animation Film „The Worlds Master Builder“ and the (now only virtual existing) layer of „The Arrival City is (not) a Machine“.

studio ASYNCHROME places in all it´s projects the question of a „contemporary utopia“ in the focus of it´s employment. The artist- and architect-duo sketches current processes, tries to give space for a discourse in their artistic, analytical expression and thus to explore the utopian potential of our society. The media of drawing allows them a direct implementation of a time-intensive research and conception.

Despite the different historical or sociological connotations, utopia is basically a neutral (ambipolar) concept, in contrast to dystopia, which is characterized by a negative societal scenario, also in contrast to eutopia, which sketches a positive organized community and a solidarity-thinking society. studio ASYNCHROME asks in its conceptual definition to understand the utopia again as interstices of the human and therefore as spaces of opportunities for the urban citizens of our world.

Radio Interview in terms of „Path´s to EU-topia“ (audio: GER)