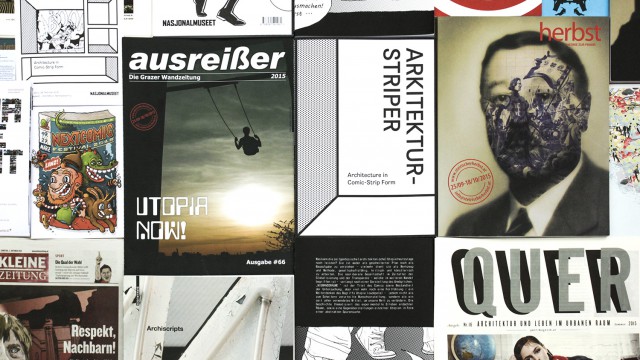 MY HOME IS MY FUTURE!
The new season book 19/20 from the Theatre Graz has been released with images from studio ASYNCHROME. Many Thanks Abstract: Today the word „utopia“ is mainly used negatively and considered as a failed plan. As applied art, architecture can and could never position itself as critically as, for example, the visual arts. Meanwhile, the architecture is characterized by pragmatism, which gives building unconditional preference. So what else can the (architectural) utopia afford? The starting point for „No-Man´s Spaces“ is the assertion that utopia is not to be understood as a construction task – that is, as a failed plan – but as a tool to work critically, artistically and socially. Think in pictures, not in economic phrases, and allow designs that were never intended as real vision. „No-Man´s Spaces“ is a „graphic novel“, that is becoming increasingly important as an artistic form of expression in architecture.

This medium succeeds in showing the potential of architecture and inviting the viewer, image for image, on a journey into the past, the present and the future. „No-Man´s Spaces“ is a juxtaposition of individual architectural utopias and allows imaginary spaces to be experimentally experienced.

The book was published under the supervision of Prof. Hans Kupelwieser at the Institute for Contemporary Art Graz and with the help of the publishing house of Graz University of Technology in a first edition of 500 pcs. studio ASYNCHROME are Co-Publisher of „Talking with the pen. Drawing as a language„.

studio ASYNCHROME published together with Claudia Gerhäusser the book of the drawing action / workshop „Talking with the pen – Drawing as a language“ at Forum Stadtpark Publishers.

Here you can get more information (german language): LINK 3 ‘An ordinary day with Cedric Price…’ studio ASYNCHROME published a spin off chapter of their comic manifesto “Niemandsräume / No Man´s spaces” in the magazin of the steirischer herbst 2015. The protagonists (alter egos) open a new door in the “space of collective memory”. Check out the link and have a virtual look on the magazine. For a print edition check out the homepage of the steirischer herbst:  herbst shop

short making of: Niemandsräume – das verlorene Kapitel oder im Raum des Generators / No man´s spaces – the lost chapter or in the room of the generator – LINK The magazin is available at Graz Art Museum, Forum Stadtpark, steirischer herbst, House of Architecture Graz and many more… for online edition of the whole drawn newspaper: LINK

Text of the review and photos by David Pasek